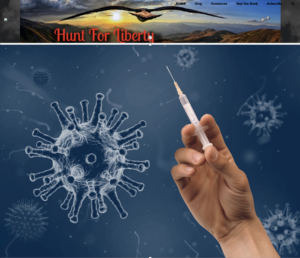 America’s Frontline Doctors, a group of medical professionals who work to promote early COVID-19 treatments and to expose the influence of pharmaceutical companies on federal decision-making, is suing the U.S. government over the COVID vaccination campaign. The latter is called by the plaintiffs “the greatest fraud in the history of the world.”

The suit filed in the U.S. District Court for the Northern District of Alabama on February 16 includes a comprehensive amount of evidence regarding such pressing issues as serious side effects linked to COVID vaccinations recorded in the U.S. military and COVID vaccines’ ineffectiveness in preventing infection and protecting one from severe disease, as shown in the breakthrough infections records of Medicare patients.

The lawsuit alleges that the federal government — and particularly the Food and Drug Administration (FDA), which is ostensibly responsible for protecting public health by ensuring the safety, efficacy, and security of medical products — was aware of these issues yet intentionally withheld them from the public.

The suit was filed by Ohio-based attorney Thomas Renz, who posted a “Special Notice Regarding Critical Evidence Related to COVID-19, Potential Governmental Corruption, and the Safety of Our Military and Citizens” on his website. The document provides bullet-point information on each allegation made in the lawsuit, and is intended to be shared with lawmakers, governors, state attorneys general, “and as many other elected officials as possible throughout the nation.”

For approximately two years now, two presidents, congress, the federal and state court systems, and the American public have been lied to, manipulated, and injured. What started as one of the most egregious over-reaches of executive power in American history — 14 days to flatten the curve — quickly morphed into an anathema to the principles upon which our republic was founded. These lies and manipulation have resulted in an economic crisis, a mental health crisis, the erosion of freedoms fundamental to all Americans, and the debilitation of our military.

While Renz underlines that his clients do not deny COVID-19’s existence, he states that non-establishment doctors have accumulated enough evidence to prove the “combination of unelected and totally corrupt bureaucrats, big tech and big pharma billionaires, the mainstream media, and the healthcare/pharmaceutical industry have successfully perpetrated the greatest fraud in the history of the world.” That was achieved through such methods as “data manipulation, terrible public health policy, and political manipulation that made a disease with approximately the same case fatality rate as the seasonal flu in most people appear to be the end of the world.”

The notice focuses on the damage that COVID vaccines have done to U.S. troops who have been vaccinated since late March 2020. The shots were mandated for the military in August 2021, and all non-compliant servicemen have been threatened with discharge. As of today, as stated by Renz, the U.S. military might become weaker by a quarter, since 25 percent of all servicemen have refused the shot.

Thanks to Department of Defense (DOD) whistleblowers Doctors Samuel Sigoloff, Peter Chambers, and Theresa Long, it has been revealed that U.S. military personnel have seen a significant increase in cancers, neurological, and reproductive issues and numerous other conditions in 2021 compared to the five-year average rate. The information was learned from the Defense Military Epidemiological Database (DMED), the official database of the anonymous medical records of all American servicemen.

As reported by The New American at the time, Renz presented this bombshell information during a panel discussion titled “Covid-19: A Second Opinion” in Washington, D.C., on January 24, 2022, hosted by Senator Ron Johnson (R-Wis.). Following the panel, the senator wrote a letter to DOD Secretary Lloyd Austin asking if he was aware of this troubling development and if he had done anything to investigate it.

Renz said in the notice that the DOD reacted to the news by providing a statement to a “fact-checking” organization claiming that “a glitch occurred in this database affecting the data from 2016-2020.”

Renz is not buying this. He says that it is unclear how a glitch could occur in “the premier epidemiological database in the world,” which is being meticulously monitored by “the entire division of the military” and also the nation’s top healthcare agencies. If that truly happened, then the health advice in the years 2016-2020 was based on false premises. Then, if there was a technical issue, how could it “repair” itself in 2021, while the whole matter remained unnoticed until the exposure in 2022?

“What has occurred represents negligence on an unprecedented level and, more likely, a clear cover-up,” alleges Renz.

DOD data accumulated and analyzed by Project Salus between January and August, 2021, showed that Biden administration officials and the president’s chief medical advisor, Dr. Anthony Fauci, were “lying in claiming this to be a ‘crisis of the unvaxxed,’” say the physicians.

Among the Medicare population of 16 million seniors, “an estimated 71% of COVID-19 cases occurred in fully vaccinated individuals.” They also accounted for some 60 percent of all COVID hospitalizations.

The project was also intended to track shots’ safety. The methodology that was used, however, seems to be designed to conceal a number of side effects. For example, all side effects that occurred within 14 days of full vaccination were excluded from reporting. At the same time, “It is well known that most side effects occur within 14 days of receiving these injections,” per the lawsuit.

Any side effects that occurred after the first dose of the Pfizer or Moderna vaccines, which are part of a two-shot series, were also ignored.

The data on breakthrough infections has not been shared with the public, nor, “to our knowledge,” with elected officials, note the plaintiffs.

This document definitively demonstrates that the DoD and DHHS (Department of Health and Human Services) have known for quite some time that the injections are ineffective but have continued to force them on our military and healthcare workers, while also falsely promoting the “safe and effective” narrative to Congress, the courts, and the public.

More than 40 thousand serious adverse events and more than 1,200 deaths were reported in the first two and a half months since the beginning of Pfizer’s COVID shot rollout. In 9,400 cases, the outcomes for vaccine recipients were unknown. This is according to the FDA’s own document titled “Cumulative analysis of post-authorization adverse event reports of PF-07302048 (BNT162B2) received through 28-Feb-2021.”

Despite the document identifying a total of 1,291 so-called adverse effects of special interest, the FDA concluded that the benefits of Pfizer shots outweigh the risks.

A “special interest” is explained by the adverse events’ “association with severe COVID-19 and events of interest for vaccines in general,” per the notice.

“Given that these injections were only authorized — as opposed to approved — and that they were a new category of drugs (gene therapies), why were these not listed as potential side effects?” ask the doctors.

On October 22, 2020, the FDA’s Vaccines and Related Biological Products Advisory Committee (VRBPAC) presented the data on the safety and efficacy of the COVID shots, which was monitored through a number of systems such as VAERS, FDA BEST, DOD, Veterans Affairs, FDA-CMS partnership, and others. Some were said to be monitored in “near real-time.”

The Renz notice reminds the public that according to federal law, both healthcare professionals and those who may receive the shot are made aware “of the significant known and potential benefits and risks of the emergency use of the product, and of the extent to which such benefits and risks are unknown.”

The FDA, per its own data, was aware of the numerous side effects yet never made them a part of the informed consent packets shared with the potential vaccine recipients, “nor has the public been made aware of the real potential for these outcomes,” according to the notice.

The VRBPAC’s presentation also acknowledged that “there may be limited information available at licensure on level and duration of effectiveness.”

The physicians are urging decision-makers to take “immediate action be taken to lift any and all mandates for military personnel to receive these dangerous injections.”

The doctors also argue for passage of legislation repealing immunity for vaccine manufacturers: “If vaccines are truly safe and effective no one should oppose this.”

Finally, the shots must be stripped of their authorization and “illegal approvals” “until such time as the public can be properly informed of the real risks of the ‘vaccines’ and of COVID-19,” say the doctors.