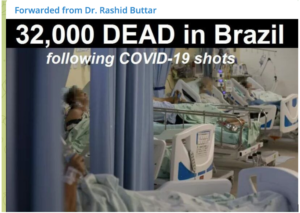 Official media reports in Brazil stated that during a 5-month period, over 32,000 people in Brazil have died following a COVID-19 injection.

Currently in Brazil, the following vaccines are authorized for use: AstraZeneca/Oxford, Pfizer/BioNTech, Coronavac (also called Sinovac), J&J/Janssen, and Butanvac.

The report was published on uol.com.br, which reportedly has about the same number of pageviews as CNN.com, according to data from SimilarWeb. It is so big, that ICANN has given its own domain: .uol.

Despite these high amounts of deaths following vaccination, the report states:  “Vaccination is still the best way to control the disease.”