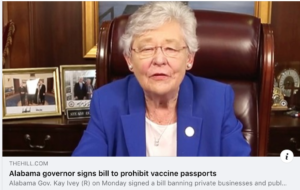 As the Montgomery Advertiser reports, the bill passed the Alabama state House 76 to 16 a week ago.

It does not, however, affect vaccine requirements already in place in schools, the newspaper notes.

The bill only applies to vaccines that were approved as of Jan. 1 and may have to be revisited in future legislative sessions.

In a press release obtained by AL.com, Ivey said, “Since the development of the COVID-19 vaccine, both [State Health Officer Scott Harris] and I have said that we would not mandate vaccines in the state of Alabama.”

“I am supportive of a voluntary vaccine and by signing this bill into law, I am only further solidifying that conviction. I made the choice to get the COVID-19 vaccine and glad for the peace of mind it brings,” she added. “I encourage any Alabamian who has not gotten their shot to roll up their sleeves, and if you have questions, consult with your health care provider.”

Other GOP-led states such as Alaska, Arizona, Florida, Texas and Wyoming have passed similar bills restricting or prohibiting the use of vaccine passports.

Alabama, like much of the Southeastern U.S., is lagging behind in terms of vaccination rates. Nearly 3 million vaccine doses have been administered in Alabama, according to the state’s department of health.

According to the Mayo Clinic’s COVID-19 vaccine tracker, around 29 percent of Alabama’s population is fully vaccinated and roughly 36 percent have received at least one dose.

Nationally, nearly 40 percent of the U.S. is fully vaccinated, according to the Centers for Disease Control and Prevention, and almost 50 percent have at least one dose.